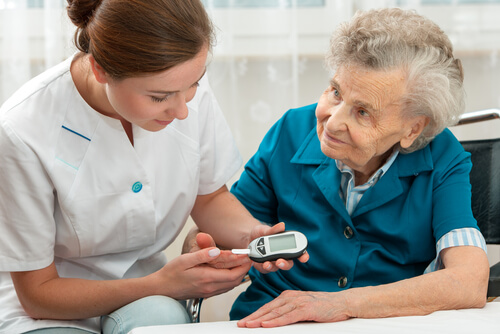 Diabetes is a chronic disease related to insulin levels in the blood. According to the World Health Organization, this disease is an emerging global epidemic that can be attributed to increased rates of obesity and physical inactivity. It can often go unnoticed in seniors, and it’s important to pay attention to potential symptoms and have frequent checks of your blood glucose levels if you are at risk.

Here are 10 facts about the disease that seniors need to know.

Type 1 diabetes is characterized by a lack of insulin production. It is caused by the body’s immune system attacking the insulin-producing cells in the pancreas. The body stops producing insulin, and glucose rises to dangerous levels. Type 2 diabetes, or noninsulin-dependent diabetes, occurs more frequently in seniors and those over the age of 40. In Type 2 diabetes, the pancreas still produces insulin (but often not enough) or the organs in the body don’t use it properly, so sometimes there is too much insulin in the system. Type 2 is much more common than Type 1 and accounts for about 90 percent of all cases worldwide.

4. Number of New Incidences Per Year

According to the CDC, in the mid-1980s, only about 30 million people around the world had diabetes. Now, the International Diabetes Federation estimates that 194 million people have it. By 2025, it is expected that 333 million will have the disease.

The percentage of Americans aged 65 and older with diabetes remains high, at 25.2 percent, or 12 million seniors. This includes diagnosed and undiagnosed cases. For seniors, the most common initial symptoms of Type 2 diabetes are increased thirst and frequent urination. Too much glucose in the bloodstream takes water from tissues, making you require more fluids. Feeling tired, out of energy, and weak can also be symptoms. The symptoms are not as obvious in the elderly as in young people, so it’s important to get frequent tests of glucose levels in the blood.

People with Type 1 diabetes, on average, have a shorter life expectancy by about 20 years than those living without it. For Type 2 diabetes, the life expectancy is about 10 years shorter. Life expectancy can often be increased with lifestyle changes, such as healthier diets and more exercise.

Total deaths from diabetes are projected to increase by more than 50 percent in the next decade. In upper-middle income countries, they are projected to rise by more than 80 percent. Diabetes kills as many people as HIV/AIDS, and it can lead to very serious health problems as well. One-third of people living with diabetes don’t even know they have the condition. The death rate might be much higher, however, because the cause of death is often recorded as heart disease or kidney failure. In 2015, it was recorded as the seventh-leading cause of death in the United States.

The disease costs $245 billion annually, representing a 4.1 percent increase over a five-year period. This includes $176 billion in direct medical costs. Patients are responsible for hospital inpatient care, prescription medications, anti-diabetic agents and diabetes supplies, and physician office visits. The average health care cost incurred by people with diabetes is about $13,700 per year. That’s about 2.3 times higher than those without diabetes.

Lack of awareness about diabetes and insufficient access to health care can lead to many health complications. Blindness, amputation, heart problems and kidney failure are some of the most severe complications. Diabetes can also affect the peripheral nervous system, lower limbs, feet and brain.

The disease can be prevented if the right measures are taken. Thirty minutes of moderate-intensity physical activity on most days and a careful, healthy diet can seriously reduce the risk of developing Type 2 diabetes. Losing 10 to 15 pounds can be helpful for those who are overweight. If you have already been diagnosed, or are at risk, it’s important to talk to your doctor about how to manage it and reduce the chance of serious complications.

Diabetes is a serious health condition that seniors should be aware of and on the lookout for. Seniors can help manage the symptoms and risks of diabetes with proper medical attention. Home care and home health care are excellent options for helping seniors stay on track with medications, and to help seniors take proper care of themselves despite physical limitations. The proper care can also help improve the quality of their daily lives.

For years, the gold standard of nutrition for longevity has been the Mediterranean diet. Rich…

Alcohol-Induced Dementia: An Epidemic on the Rise?