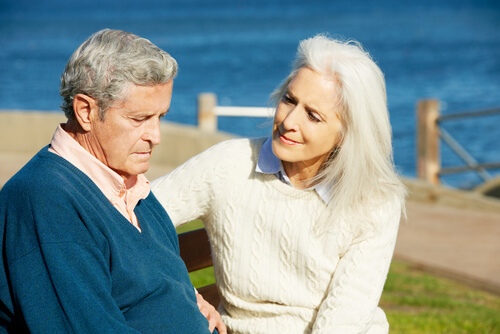 Dementia is a syndrome that affects memory, thinking, behavior, and a person’s ability to complete basic everyday activities. It is typically of a chronic or progressive nature, meaning that mild symptoms appear early and then continue to worsen over time. It is normal to lose some mental ability over the years, so many seniors will suffer from memory loss or the inability to process information as well as they did when they were younger. However, a sharp decline in thinking ability that isn’t a product of just aging alone might be dementia.

The cognitive impairment from dementia can include areas of thinking such as memory, speech and decision-making. Dementia is often used interchangeably with Alzheimer’s disease to describe the same condition. People suffering from dementia might find themselves forgetting people’s names or activities that they just completed. They may have difficulty cooking or cleaning. They might also often misplace things like keys and glasses.

Here are 10 facts about dementia that every senior needs to know.

The number of people living with dementia worldwide is currently estimated at 47 million and is projected to increase to 75 million by 2030. The number of cases of dementia is expected to nearly triple by 2050.

Dementia Is Not a Specific Disease

Dementia isn’t a specific disease. It is an overall term that refers to a wide range of symptoms associated with a decline in memory–or other thinking skills–that is severe enough to impact a person’s ability to perform daily activities. Alzheimer’s disease accounts for 60 to 80 percent of cases, and vascular dementia, which results from a stroke, is the second most common form.

Dementia can have a wide variety of symptoms, some of which are often mistaken for simple senility. However, the belief that aging should cause significant mental decline just isn’t true. Dementia will cause more serious changes in a person’s behavior and ability to take care of themselves. Common symptoms are impaired memory, changes in communication and language, lack of ability to focus and pay attention, decline in reasoning and judgment, and a deterioration of visual perception. Memory loss alone isn’t necessarily a sign of dementia. There are many causes for memory loss, and it’s a good idea for patients to talk to their doctor if they experience this.

Dementia is generally a progressive disease, meaning symptoms start out slowly and get worse over time. Part of the progression often involves the patient losing cognizance of their own cognitive decline, marked by occasional awareness that can lead to events such as Alzheimer’s Aggression.

Dementia is caused by damage to brain cells. The damage impairs the ability of brain cells to communicate with each other, and this affects thinking, behavior and feelings. Symptoms present themselves slightly differently in different cases because they depend on which region of the brain has had cell damage. In Alzheimer’s disease, high levels of certain proteins in and outside of the brain cells make it hard for them to stay healthy and communicate with each other. The hippocampus, the center for memory in the brain, is often the first region to be damaged.

There is not one simple test to diagnose dementia. Rather, doctors will take a careful medical history, administer a physical exam, perform lab tests and monitor changes in day-to-day function and behavior in order to determine if a person has dementia. Even then, they might not be able to diagnose a specific type and instead use the general term.

Doctors will decide how to treat dementia based on what has caused it. In most cases, there is no cure and nothing that stops its progression. But some drug treatments can improve certain symptoms. Alzheimer’s medications are often used for all types of dementia. However, very little is known about how to treat dementia or stop the disease from getting worse. It is not a fatal disease, but it can lead to many accidents, some of them fatal, and patients with dementia can put themselves and others in danger because of the memory loss and lack of awareness.

Certain risk factors can’t be changed, such as age and genetics. But there are some things you can to do reduce the chances of getting dementia as a senior. Avoiding damage to your cardiovascular system is one of the main prevention methods. Anything that damages your blood vessels can damage your brain and its ability to provide oxygen to your body. Changes in blood vessels in the brain are linked to vascular dementia. You can help your brain by not smoking and keeping your blood pressure, cholesterol and blood sugar within recommended limits. Exercise can also help increase blood and oxygen flow to the brain. And eating a high-protein diet with plenty of whole grains, fruits and vegetables, and healthy fats can have a great impact on brain health.

More and more women are living well into their 80s, and they are more affected by the disease than men. Almost two-thirds of Americans living with Alzheimer’s are women. African-Americans are about twice as likely to have Alzheimer’s or other types of dementia as older Caucasians, and Hispanics are about 1.5 times as likely to have it as older Caucasians.

Alzheimer’s is the sixth leading cause of death in America after Heart disease, Cancer (malignant neoplasms), Chronic lower respiratory disease, Accidents (unintentional injuries), and Stroke (cerebrovascular diseases). One in three seniors dies with Alzheimer’s or another type of dementia. Alzheimer’s is the only one of the top 10 causes of death that can’t be prevented, cured or even slowed down. Among people at the age of 70, 61 percent of those with Alzheimer’s are expected to die before the age of 80, compared to 30 percent of people without Alzheimer’s.

Diabetes is a chronic disease related to insulin levels in the blood. According to the…

Poor Oral Health Linked to One in Ten Deaths in Seniors

From the time our first incisors pop through our gum line, doctors and dentists urge…

10 Facts About Cancer Every Senior Should Know

Cancer is a widespread disease that can affect anyone at any age. People of all…