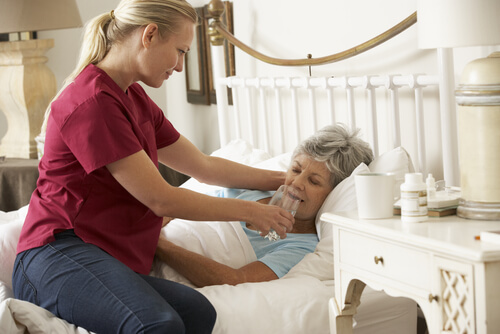 Like all living organisms, humans need water to survive. Approximately 60 percent of the adult body is composed of water. This fluid cleanses the body of waste, regulates body temperature through respiration and perspiration, lubricates joints, transports nutrients through the bloodstream, among others. If your body does not have enough fluid to perform its necessary functions, dehydration occurs.

Although anyone can become dehydrated, seniors are particularly vulnerable to this condition. Here are 10 facts about dehydration every senior should know.

Causes of Dehydration in Seniors

The body steadily loses water through respiration, perspiration, and urination. If you do not drink enough fluids to replace what is lost, you will become dehydrated.

Because of age-related changes to their bodies, seniors are at increased risk of dehydration. For instance, many seniors are on several medications, some of which may be diuretics that increase urination. Blood pressure medicines, antihistamines, and laxatives can also cause dehydration. Seniors may also take medications that make them sweat more or they may have diseases, such as diabetes, that cause frequent urination.

Research has shown that people have a decreased sense of thirst as they age, meaning that seniors may not feel the need to drink more water or other fluids. In addition, kidney function also declines as they age. This makes seniors lose more water than they did when they were younger.

In addition, seniors may have mobility issues that prevent them from getting their own water, or they may not be able to communicate their thirst to their home health aide or loved ones.

Symptoms range from mild to severe. Mild symptoms can include headache, chills, dark yellow urine and fatigue. Even mild dehydration can negatively affect your health. If it goes on long enough, it can cause a host of health issues, including kidney disease, circulation problems, high blood pressure, ulcers and respiratory issues.

If dehydration continues and worsens, more serious symptoms will develop. Some of these symptoms may include sunken eyes, difficulty walking, muscle cramps, seizures, shriveled skin, and coma. If emergency treatment isn’t administered, death will result.

Dehydration in seniors is a condition frequently missed by caregivers, whether they receive in-home care or in a long-term care facility. This is because some of the symptoms – such as difficulty walking, fatigue, sunken eyes, and shriveled skin – do not seem unusual for an elderly person.

Many studies indicate that dehydration is a problem with patients in long-term care facilities; one such study showed 31 percent of these residents were dehydrated.

Prevalence of Dehydration in Seniors

Dehydration is extremely common in the general population. Research has shown that up to 75 percent of Americans are chronically dehydrated. Many of these individuals are just slightly dehydrated and do not require hospitalization. The opposite may be true for seniors. According to the Health Care Financing Administration, dehydration is one of the top ten admitting diagnoses for patients on Medicare.

Though seniors are prone to dehydration, this is also one of the easiest conditions to reverse. To stay hydrated, make sure you drink at least five glasses of water a day, even if you are not thirsty. If it is not easy for you to stand up or walk to the kitchen to get a drink, keep a water bottle beside your chair at all times. Eat fruits, vegetables and other foods that have high water content. Reduce your intake of coffee, tea, soda and chocolate, as caffeine is a diuretic.

How Meditation Can Reduce Risk of Certain Diseases

Meditation is nothing new; it dates back to 5000 B.C. and was initially associated with…

Depression in the Elderly: Facts, Treatments, and Management

Aging is a regular part of life. Invariably with age come changes, such as retirement,…