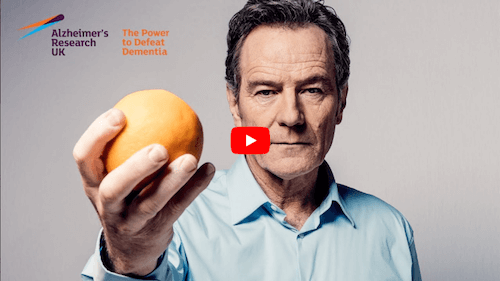 Alzheimer’s Research UK, a firm dedicated to research and education on the topic of Alzheimer’s Disease dementia, had begun a campaign to raise funds for their research. Their website reads, “Help us share better understanding about dementia. Too many people still think dementia is just a natural part of ageing, which means they don’t realise that it is something we could, one day, defeat. To help change that, and to fight misunderstanding, please share this film about an orange.”

Dementia is a syndrome that affects memory, thinking, behavior, and a person’s ability to complete basic everyday activities. It is typically of a chronic or progressive nature, meaning that mild symptoms appear early and then continue to worsen over time. It is normal to lose some mental ability over the years, so many seniors will suffer from memory loss or the inability to process information as well as they did when they were younger. However, a sharp decline in thinking ability that isn’t a product of just aging alone might be dementia.

The cognitive impairment from dementia can include areas of thinking such as memory, speech and decision-making. Dementia is often used interchangeably with Alzheimer’s disease to describe the same condition. People suffering from dementia might find themselves forgetting people’s names or activities that they just completed. They may have difficulty cooking or cleaning. They might also often misplace things like keys and glasses.

What is Alzheimer’s Disease?

Alzheimer’s Disease is a form of dementia and a condition that impairs patients’ mental function and memory. Someone suffering from Alzheimer’s might be easily able to remember things from years ago but have a difficult time recalling things that happened minutes before. It is the sixth leading cause of death in the United States and has become more and more common as the years go on.

More than five million Americans are living with Alzheimer’s disease, and it is expected that by 2050, this number could rise to as high as 16 million. Someone in the United States develops the disease every 66 seconds. Almost two-thirds of Americans with Alzheimer’s are women.

Alzheimer’s can be hard to detect initially because the symptoms can mimic those of aging. They include fading memory and sharpness of thought. While this is often considered to be a normal sign of aging, it is not. Memory loss is by far the most common symptom. It can include easily forgetting information that you just learned, such as important dates, names and events, and having trouble recognizing faces. Daily tasks, such as driving or basic chores, can become difficult. Times and places can seem confusing and patients can experience changes in vision that make it harder to read or gauge distance. These symptoms can worsen until a person actually puts him or herself in danger each day.

In 2016, 15.9 million family and friends provided 18.2 billion hours of unpaid assistance to those with Alzheimer’s and other dementias. This contribution was valued at $230.1 billion total. Alzheimer’s care can take a huge toll on caregivers, and many indicate substantial emotional, financial and physical difficulties compared with caring for people with other types of dementia. Alzheimer’s is one of the costliest conditions to society, and people with Alzheimer’s or other dementias have twice as many hospital stays per year as other older people.

Dementia is a progressive illness for which there is currently no cure. Each person stricken…

Nearly Half of Baby Boomers Have Saved Nothing for Retirement

As Baby Boomers continue to retire (at a rate of almost 10,000 per day), economists…