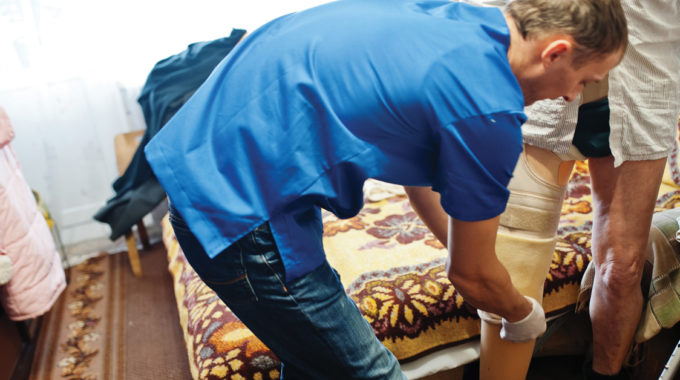 Amputation is an unfortunate consequence of uncontrolled diabetes. Starting in 1990, diabetic foot and leg amputations were on the decline. A new study shows that since 2009, these amputations have been rising in prevalence. All of our progress since 2003 appears to have been reversed. For older adults, home health may be an easy part of the solution for staying on track with diabetes management.

How Does Diabetes Lead to Amputations?

Diabetes causes wounds to heal more slowly and progress more quickly. High blood sugar prevents nutrients from energizing cells, depresses the immune system, and increases inflammation.1 To make matters worse, diabetes can also lead to foot neuropathy, and condition that, among other things, causes the foot to lose the sense of touch. Finally, uncontrolled diabetes often leads to compromised circulation with thicker blood and peripheral vascular disease which narrows blood vessels. With all this going on, it’s easier to get a small cut on the foot, and the cut can quickly develop into an ulcer.

About Diabetic Foot and Leg Amputations

Diabetic Foot Amputations Were on the Decline

Amputation rates serve as an important indicator of overall diabetes care in a population. People who require amputations likely have multiple other morbidities associated with their diabetes. The healthcare community specifically targeted getting better control of this situation, and from 1990 until recently, the rate of diabetic lower limb amputations has been on the decline. Between 1990 and 2010, lower limb amputations decreased by roughly half, and other major indicators of diabetes management also improved.3

Are Diabetic Amputations on the Rise?

A study recently published in Diabetes Care suggests diabetic amputations may be making a comeback. Linda Geiss and colleagues from the Centers for Disease Control (CDC) analyzed hospitalization records across the country. They found that since 2009, the number of hospital discharges for diabetic amputations has increased 51%. This has wiped out all progress made since 2003.

Interestingly, this is not simply a consequence of an aging population. For one thing, Geiss et al. age-adjusted their numbers. Moreover, the strongest increases were seen among young and middle-age people. For instance, among people age 65 to 74, minor amputations increased 12% from 2009 to 2010. Is this a sign that America has taken its eye off the ball related to diabetes control?

When seniors are homebound and struggling with effective diabetes management, they should request home health. Medicare will pay 100% for weeks and even months of home health nurse visits. For many seniors, successful diabetes management training can’t be had in a busy medical practice. They need more time spent with them, repetition, and more personalized strategies. Home health nurses travel to a patient’s home, making the program very convenient. They often spend 30 minutes per visit, and they make multiple visits spread over weeks or months to ensure success. With healthcare being delivered in the home, home health nurses can recruit and train family caregivers to help grandparents. They can also go through refrigerators and pantries with seniors, having real-world conversations about actual food choices.

The Number One Cause of Lung Cancer Among Non-Smokers

Cigarette smoking still ranks as the number one cause of lung cancer. It’s a toxic…

Are Holiday Blues a Myth?

The holidays are upon us. A season of celebration fills the nation with good cheer.…

Advances in drugs, medical equipment, surgery and other healthcare have increased the survival of small…

The Magic Phrase that Saves You 33% on Drug Costs

For 12 of the 20 most commonly prescribed drugs, people paid 33% more than they…